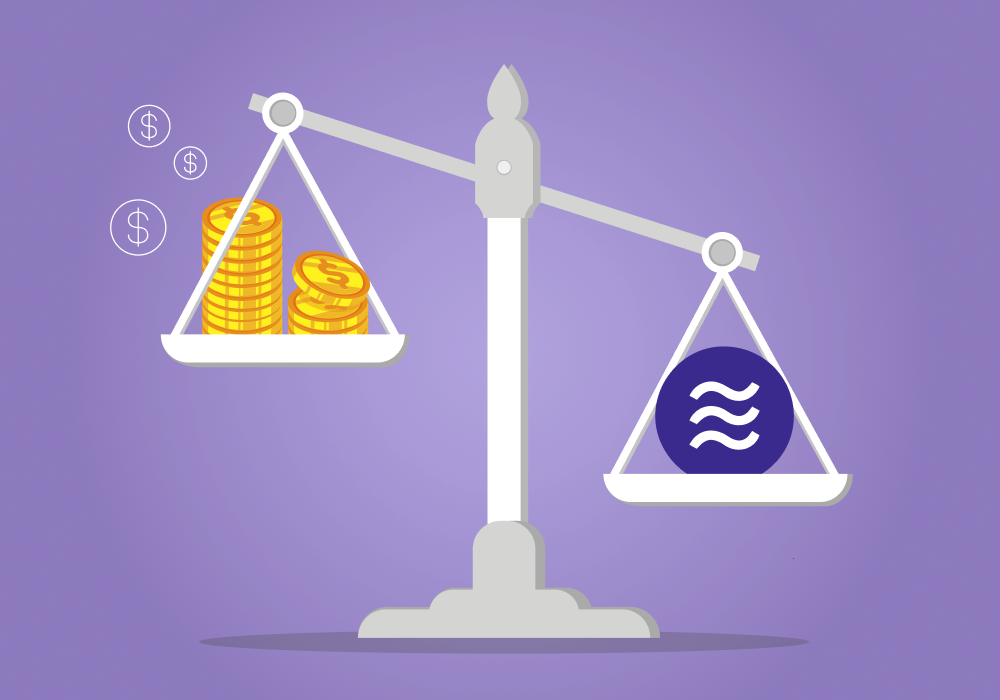 In June of 2019, Mark Zuckerberg presented a cryptocurrency called Libra. It is a kind of challenge to the entire global financial system since Libra will be a decentralized stable cryptocurrency and will be supported by fiat currencies such as Yen, Dollar and the Euro.

In recent years, the largest web sites and social networks were regularly subjected to hacker attacks, which led to the leakage of user information and a decrease in user loyalty to such resources, including Facebook. That is why Libra-cryptocurrency has made a lot of noise. The new project has both followers and opponents. The main opponents act on behalf of states, that are not interested in Libra. The digital coin is criticized by financial regulators in many countries around the world. Senior US and European Union officials regard the Libra project as a threat to state sovereignty. Due to increased pressure from regulators, the consortium left PayPal. This may shift the timing of the project. Facebook officially announced that its crypto wallet Calibra will not have any relation to the social network and the personal data of its users.

The main idea is to create a coin based on the concept of forming an internal payment ecosystem within Facebook, with decentralized currency, based on Blockchain technology that will provide the necessary level of transaction security. Taking into consideration the huge user audience of Libra, it will have tremendous potential and going to be very popular around the world.

Besides Facebook there are 28 members are behind the Libra. It is a kind of union called Libra Association. In other words, the Association forms a large reserve, the members of which have invested 10 million dollars each to acquire 1% of the voting right. Among members, there are MasterCard, Uber, Spotify, Lift and many other global giant-companies. As soon as Association reaches 100 members its membership will be closed for others.

It is also worth noting that Facebook representatives began active work to establish partnerships with major international financial institutions. Such steps will help the token become a universal payment tool for conducting financial transactions both within the social network and on cryptocurrency exchanges. Besides, cryptocurrency will become a mean of payment for advertising services within the FB social network.

Initially, Libra will be used as an international currency of Facebook, later, users will be able to send and receive it from anywhere in the world. Facebook Messenger, WhatsApp and later Instagram will also join the service.

This is a real revolution in financial and cryptocurrency markets. Users will be able to store, send and receive Libra through the Calibra crypto wallet at almost free of charge. Facebook launched Libra not due to the pursuit of a general trend, but to a real need. Presumably, Libra was created for low-income groups to help them make purchases and pay for any services without the participation of banks. Because almost 1, 7 billion of the world’s population have never had a bank account, Libra will be called upon to simplify their lives and make paying, receiving and sending money simple and cheap.

It is expected that Libra will be launched in the first half of 2020. Currently, Facebook is experiencing difficulties since it is under great pressure from the state.

The latest Facebook coin news indicates that this token will soon need to receive an official license from the CFTC (U.S. Commodity Exchange Trading Commission), that will allow this asset to receive the status of a full-fledged exchange and financial instrument.

The forecasts vary, as skeptics and ardent supporters of the global electronic currency participate in them, but most likely Libra will be approved everywhere and there are irresistible arguments for this:

• Cryptocurrency supported by a basket of fiat currencies.

• It will be available to absolutely everyone, almost replacing the usual money.

• The crypto coin is stable. It practically does not have any fluctuations, unlike other coins, for example, like Bitcoin. This means that its price will be stable without sharp jumps, and global fraudsters will have no reason to speculate.

How will it work?

Cash and local currency for example like Dollars can get the same number of Libra coins. First, the user will have to verify his or her identity with a photo ID. After it will be possible to spend Libra online: shopping or pay for other services. Since it is almost free to digitally move people won’t have to pay high credit card processing fees that can add almost 4 % to their total. Some Libra wallet apps and shops will give bonus discounts or free coins for signing and paying with Libra. People will be able to send and request money from friends like they do with Venmo or PayPal. Also, it will be possible to send Libra like a message. Also, Facebook will represent its own Libra Wallet app called Calibra that will live inside of WhatsApp, Facebook messenger and stay alone as an app.

People will not have to attach their real names and identity to any of their payments, but they will be public. Calibra will keep all financial data of users separate from their Facebook profiles. It means that people can’t use their transaction data to target them with ads or reorder their news feed. Facebook hopes that users will use to pay their bills, scan their wallets QR code to purchase coffee or tap phone to buy public transit tickets anytime. Besides the main function of the coin that allows its users to buy items and send money online with zero fees It will be possible to:

What is the difference between Libra and other cryptocurrencies, like Bitcoin?

Libra acts as a digital dollar compared to Bitcoin, which acts as digital gold. Libra is creating a digital version of main currencies: Dollar, Yen, Euro. It is like a stable coin. But, at the same time, it still has all characteristics of fiat currency. In a case with Bitcoin, there is no trusted party involved. In a case with Libra financial services are disintermediated. Facebook opens a new global payment space almost for everyone at zero cost plus a nice-looking crypto wallet Calibra.

It is a stable coin. The value of Libra is meant to stay stable. Its value is tied to bank deposits and short-term government securities for a slew of historically stable currencies like Euro, Dollar, Yen and British pound. Due to these assets, the Libra Association can change the balance of its composition to offset price fluctuations in any one foreign currency so its value remains the same all the time.

The Libra Blockchain. Compared to Bitcoin’s measly 7 transactions per second, the Libra coin was designed to handle 1 000 transactions per second. The Libra Blockchain will also start as “permissioned” where only entities who meet certain requirements are admitted in a special in-group that defined the consensus and controls the governance of the Blockchain. In the future, it aims to be completely decentralized.

Libra’s Coding language. “Move” was created to make it easier to write a Blockchain code that follows an author’s intent without introducing bugs. It is called “Move” because its primary function to move Libra coins from one account to another and never let those assets be accidentally duplicated.

100% circulation. Every time someone cashes in a dollar or their respective local currency. That money goes into the Libra Reserve and an equivalent is minted out to that person. İt works the other way around as well. İf someone cashes out money the Libra they give back will be destroyed. This means Libra never runs fractionally.

Incentives. Libra also plans to give incentives to users who encourage the business to flourish. To get these rewards users that get people to go through KYC verification or wallets and keep users active for a year will reap benefits.

Transaction speed. Speed transaction of Libra. 1000 transactions per second cannot ensure the global dominance of cryptocurrency. The developers plan to provide an opportunity to have an active Blockchain node for anyone in the future and also to enable users to make their own decisions related to the functioning of the network in accordance with the concept “more coins – more votes”.

Inflation. After the conversion of fiat currency into cryptocurrency, the first one does not go out of cycle but returns to the economy through investment instruments. At the same time, there appears a Libra-new currency and money increase in an amount twice. Such an uncontrolled situation can lead to inflation in the future.

Security and Privacy. According to the documentation, the system is designed in accordance with pseudonym security, that is, the addresses used in the protocol are obtained from public keys on elliptic curves and do not contain metadata on users’ accounts. However, it is impossible to find any information in management description of the structure for the organization or in the protocol how the economic data participating in transactions will be hidden from validators. The system is designed for large-scale replication of transactions for some external parties, that following existing European and American bank secrecy laws, should not be devoted to economic details. Libra HotStuff BFT is not able to achieve the bandwidth required for the payment system.

“Move”. Many developers argue that Libra’s “Move” language is incorrect. The white paper makes bold statements about a new unverified language called “Move”. These statements are rather doubtful from the theory of programming languages (PLT).

Troubles arising from distrust towards large-scaled technological companies make Libra undependable on one hand. On another hand mass currency digitalizing puts governments of many countries at crossroads. While companies and countries argue and predict Libra’s future, Facebook purposively goes a step ahead each day and pulls its large audience around the world together with Libra crypto project.

And remember, no matter what new coins appear in the crypto world, you can always exchange your coin on StealthEX. Just go to http://stealthex.io and choose the pair and the amount for your exchange. Then follow these easy steps: