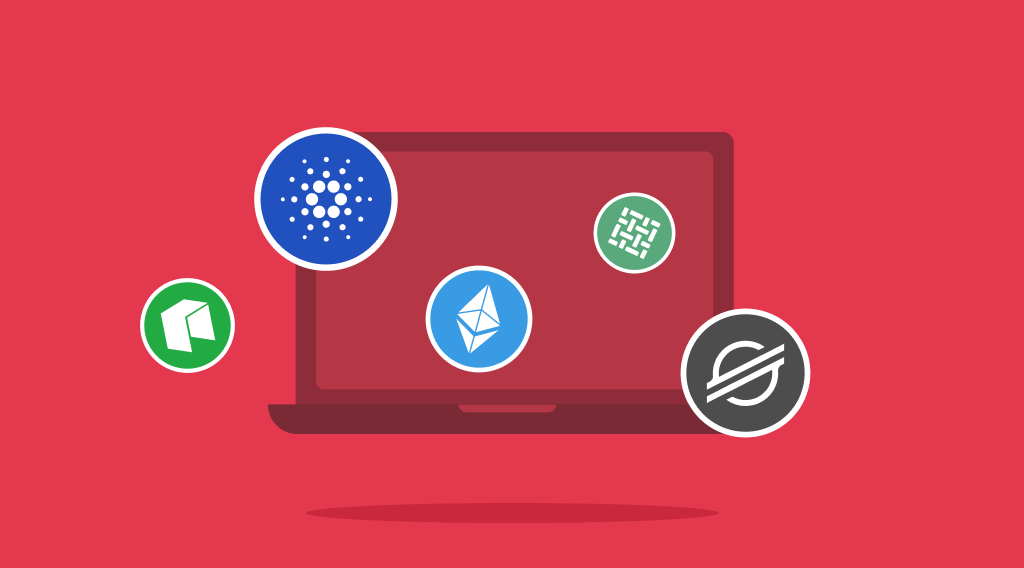 There’re many crypto platforms that utilize smart contracts. In this article, we’ll take a look at five platforms that took these building blocks as the basis for their operation.

Ethereum can be referred to as the mother of all smart contracts. The Ethereum blockchain was created in 2013 specifically to write and execute these pieces of code. To date, it is the most popular platform for doing so. Hundreds of apps that use smart contracts are already up and running. Well-known Ethereum apps like MakerDAO and Compound use them at their core for lending and allowing users to earn interest.

Each transaction on Bitcoin represents a smart contract because the network will only approve of the transactions if certain conditions are met – that the user provides a digital signature proving that they indeed own the cryptocurrency they claim to own. Only the owner of a Bitcoin private key can produce such a digital signature.

By contrast, Ethereum replaces Bitcoin’s more restrictive language, replacing it with language that allows developers to use the blockchain to process more than just cryptocurrency transactions. The language is ‘Turing-complete,’ meaning it supports a broader set of computational instructions. Without limits, programmers can write just about any smart contract they can think of. To this day, smart contracts are associated with Ethereum.

Among others, Ethereum offers the following features:

Hyperledger Fabric is an open-source environment launched by Linux in December 2015. The Hyperledger solutions, which are also supported by IBM and Intel, combine high security and transparency with peer-to-peer efficiency and collaborative design. The platform does two most important things: it leverages blockchain architecture while ensuring data privacy.

When it comes to smart contracts, every chaincode comes with a set of rules governing smart contracts within it. This policy is exceptionally important. It determines which network participants (organizations) must sign a contract-generated transaction to validate it. For instance, both the seller and the buyer must sign and execute the transaction to transfer goods. Only trusted parties must validate it. As a result, this blockchain technology models real-world interactions better than Bitcoin or Ethereum.

Hyperledger Fabric is already used for loyalty and rewards, securing land registries, clearing and settlement of financial assets, and more.

The main features of Hyperledger Fabric are:

With further development, Cardano could ultimately achieve transaction speeds of up to 100,000 transactions per second. Such an increase in scalability would give Cardano a huge competitive advantage over Ethereum in the future. Ethereum is currently still in the process of completing the transition to Ethereum 2.0, but even Ethereum 2.0 could hardly offer such speeds.

Cardano is meant to be scalable, sustainable, and practical with alternative blockchains and system architectures. Additionally, the platform has one among the strongest communities within the industry. There are countless other potential uses for smart contracts, whether for financial transactions, insurance, voting, or even for digital identity cards.

The main features of Cardano are:

Stellar, launched in 2014, is a payment protocol based on the distributed ledger technology, which allows cross-border transactions between any pair of currencies. At the moment, Stellar is among the top 10 popular blockchain platforms. Stellar Lumens (XLM) are one of the leading cryptocurrencies with steadily rising acceptance and adoption in the market. Earlier this summer, the Stellar Development Foundation celebrated the launch of a preview for their upcoming smart contract platform, called ‘Soroban,’ that – as the team claims – has the potential to become the ‘standard for smart contracts’ in the crypto industry.

Except for money transfers, Stellar platform can be used for mobile and trading clients, P2P lending, or provide a micro-savings account in the fields of health and insurance. Donation systems for non-profit organizations can also be built on this blockchain, and it can distribute loyalty points to members.

NEO is an open-source platform founded in 2014. In its essence, it’s a blockchain designed to provide a distributed network for the so-called ‘smart economy.’ Formerly known as Antshares and often referred to as China’s Ethereum, Neo enables the development of digital assets and smart contracts.

In the theory behind a smart economy, digital assets and digital identities are seen as being essential to improving the quality of life for everyone. NEO aims to automate digital asset management through smart contracts. Neo’s platform allows developers to use its software to run smart contracts (known as NeoContracts) and design new programs (dApps) meant to replicate real-world products and services.

NeoContracts differ from other smart contract-based protocols in that developers can build applications using a variety of popular existing languages (like C# and Java), rather than learning a new language.

NEO maintains a clear distinction from other standard blockchain platforms in its focus on being regulatory-compliant and a development platform for decentralized applications. It also uses a different consensus mechanism than Bitcoin and Ethereum, called delegated Byzantine Fault Tolerance (dBFT).

The network’s use cases can include DeFi applications such as data exchange marketplaces, streamlined investment management tools, and new processes for creating and interacting with decentralized exchanges (DEXs) and liquidity provider (LP) tokens.

Some of the most exciting features of the NEO protocol are:

Smart Contracts on Blockchain: Are They the Future?

Many experts and crypto enthusiasts are excited about the promises of smart contracts. However, the technology is still at its early stages of development. While users of smart contracts don’t need to trust intermediaries, users must trust that the code was written correctly, which is, unfortunately, not always the case. At the moment, we can hope that smart contracts execution will eventually get better and following this they can gain better recognition.

Don’t forget that you can buy cryptocurrencies and digital tokens with StealthEX for investment or any other purposes and enjoy the low commission rates we are normally offering to our clients.

StealthEX can help you buy one or a number of popular cryptocurrencies. You can do this privately and without the need to sign up for the service. Our crypto collection has more than 450 different coins and you can do wallet-to-wallet transfers instantly and problem-free.

Do complete your purchase, just go to StealthEX and follow these easy steps: