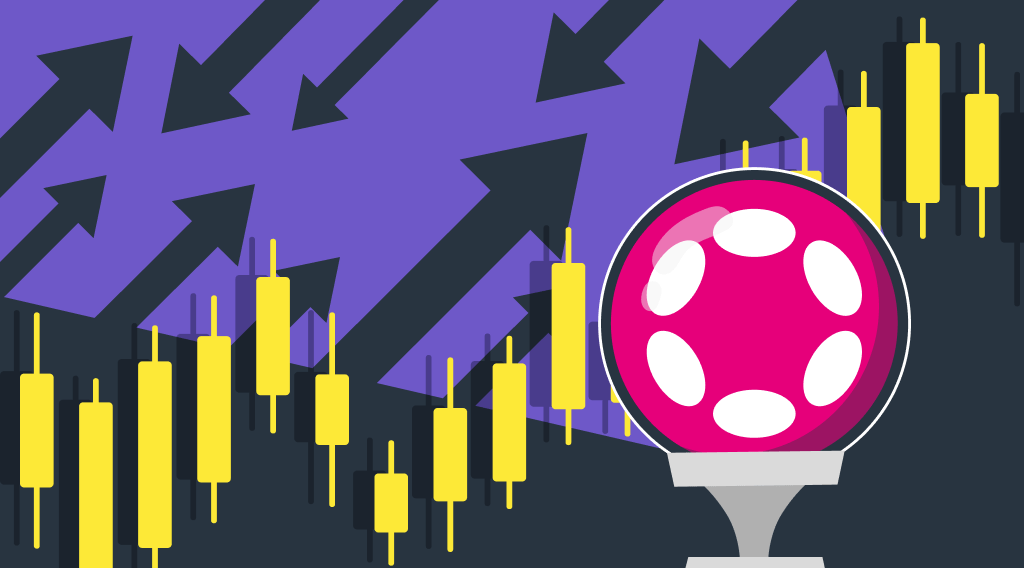 The most important issues that modern blockchains face include scalability, isolatability, developability, governance, and applicability. There are thousands of cryptocurrencies across different ecosystems, a vast majority of which can’t communicate with each other. For instance, users can’t send their Dogecoin over Chainlink or vice versa. Founded in 2016, Polkadot blockchain aims to fix the five issues and increase blockchain interoperability by building a framework that interconnects networks, even if each chain performs different functions to one another. The blockchain’s native token DOT is currently available on the cryptomarket. Read more about Polkadot coin DOT price prediction in the new StealthEX article.

Long-term forecasts for Polkadot crypto price vary. In the world of crypto, long-term predictions may resemble guessing, however, some crypto enthusiasts have forecasted Polkadot potential for 2040. For instance, Telegaon experts think that in 2040, the crypto market may expect an average price of $381.21 (+6.149%) per DOT coin depending upon the market trend. The website experts also believe that in 2050, the minimum price per DOT coin can be around $719.86 (+11,700%).

At the center of Polkadot sits the Relay Chain, a central blockchain that connects all other participating blockchains together. The relay chain processes all transactions taking place in the ecosystem at the same time, with the goal of improving scalability. User-created blockchains that hook into the Relay Chain are known as Parachains. By allowing blockchains to communicate with its platform, the blockchain is able to connect many blockchains in a way that wasn’t possible before.

However, Polkadot is not itself a smart contract platform. Instead, it provides the infrastructure for dApp developers to integrate smart contracts across an interoperable network of wide-ranging functionality, witnessing the largest increase in active developers of major protocols as a result.

In essence, Polkadot is a scalable heterogeneous multi-chain. This means that unlike previous blockchain implementations which have focused on providing a single chain of varying degrees of generality over potential applications, Polkadot itself is designed to provide no inherent application functionality. It may be considered equivalent to a set of independent chains (e.g. the set containing Ethereum, Ethereum Classic, Namecoin, and Bitcoin) except for two very important points: pooled security and trust-free interchain transactability.

Polkadot is built to connect private and consortium chains, public and permissionless networks, oracles, and future technologies that are yet to be created. The innovative blockchain facilitates an internet where independent blockchains can exchange information and transactions in a trustless way via Polkadot’s Relay Chain. Polkadot makes it easier than ever to create and connect decentralized applications, services, and institutions. Messari’s data suggests that Polkadot is the most decentralized network among its peers. The blockchain intelligence platform stated that it has a high Nakamoto Coefficient indicating a high number of nodes that must be compromised to affect the blockchain and prevent it from proper functioning.

As Polkadot is built with the Substrate blockchain framework, other projects using Substrate can deploy custom chains quickly and easily that run natively on Polkadot. This means that you can start working on a blockchain using the framework before you are ready to deploy on the network.

For a Proof-of-Authority (PoA) style network, this alone would be sufficient, however, Polkadot is imagined to be also deployable as a network in a fully open and public situation without any particular organization or trusted authority required to maintain it. NPoS method is designed with four roles for users who hold DOT crypto:

The Relay Chain will likely be a chain broadly similar to Ethereum. Placing accounts here fulfills one purpose: to provide accounting for which identity possesses what amount of stake in the system. The main differences between Polkadot and Ethereum blockchains include the following:

One of the most interesting features of Polkadot is interchain communication. Since Parachains can have some sort of information channel between them, Polkadot can be considered a scalable multi-chain. And in this case, the communication is as simple as can be: transactions executing in a parachain are able to effect the dispatch of a transaction into a second Parachain or, potentially, the Relay Chain. Like external transactions on production blockchains, they are fully asynchronous and there is no intrinsic ability for them to return any kind of information back to its origin.

In 2022, Polkadot launched its messaging system XCM (cross-consensus messaging) to enable communication between its various Parachains and allow assets like non-fungible tokens (NFTs) to be transferred from one chain to another. With the launch of this format, Polkadot fulfills its foundational objective to be a fully interoperable multichain ecosystem.

Is Polkadot a Good Investment?

Polkadot’s revolutionary design introduces a multi-chain network, solving the scalability issues and high fees. Far from being an ‘Ethereum killer’ as it’s been referred to, or competitor to other networks, Polkadot dismisses the idea that there should only be one blockchain. It delivers a new era of cross-chain interoperability. The blockchain’s additional scalability and cross-chain functionality have already attracted many projects including:

These are just a few use cases being brought to the Polkadot ecosystem. These partnerships contribute to the value and utility of the network and the price of DOT tokens that may grow over time. Polkadot is one of the leading blockchains on the market, so its native token may provide significant value on the new bull market.

Where to Buy DOT Coin?

StealthEX is here to help you buy DOT crypto. You can do this privately and without the need to sign up for the service. Our crypto collection has more than 600 different coins and you can do wallet-to-wallet transfers instantly and problem-free.

How to Buy DOT Crypto?